Types of Ticks in Virginia

And Dangerous Diseases They Transmit 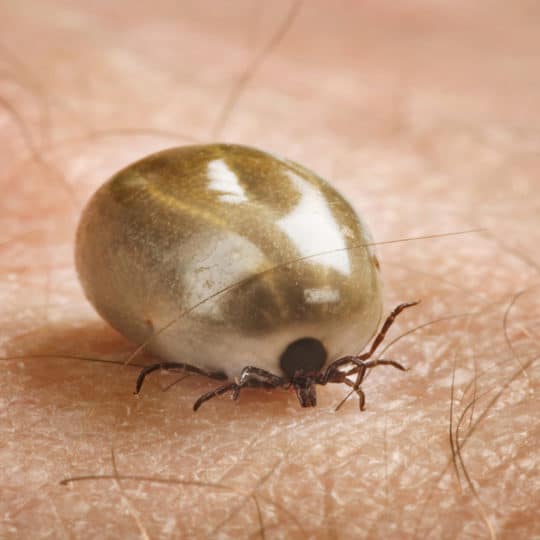 There are multiple ticks you might find in Virginia, and there are some concerning illnesses they can spread. While you don’t want this parasite biting you, not all tick bites are as dangerous as others. So, when you find one on you, be sure to identify what kind it is. Read on to learn about the types of ticks you’ll find in Virginia.

The lone star tick, also known as Amblyomma americanum, is an aggressive tick that commonly bites humans. It is about 5mm in length or smaller with long mouthparts. It is named after the white spot or “lone star” found on its back, which makes it very identifiable.

The deer tick, Ixodes scapularis, is the tiniest tick you’ll find at 2-3 mm long. It’s so tiny, you might not even see it before it becomes engorged with blood. After feeding, it will turn off-white or reddish. This tick has long mouthparts.

The brown dog tick, also known as Rhipicephalus sanguineus, is about 5mm long. It has a dark reddish-brown color and doesn’t have any light marking. This tick has short stout mouthparts.

The American dog tick, Dermacentor variabilis, looks similar to the brown dog tick at 5 mm long with short mouthparts. However, this dark brown tick also has light wavy lines on its back.

Ticks aren’t just pesky pests. They can transmit severe and life-long diseases. Two of the most threatening diseases are Lyme Disease and Rocky Mountain Spotted Fever.

Deer ticks spread Lyme disease. Symptoms of this potentially dangerous disease include a bullseye marking, fever, fatigue, muscle aches, and headaches. It is important Lyme disease is treated immediately because it can cause severe symptoms that persist for a lifetime, including arthritis and permanent brain damage.

Lone star ticks and dog ticks spread Rocky Mountain spotted fever. As the name suggests, this tick-borne disease causes a fever. There is also a rash that begins on the wrists and hands and spreads to the torso over hours to days. It is life-threatening if not treated.

Tip: If you are bitten by a tick, carefully remove it and put it in a plastic bag to help identify the risks.

We are here for you with our tick control services that prevent and treat tick infestations so you can feel more comfortable spending time in your backyard. Call us today at 571-620-1168 for a free quote.