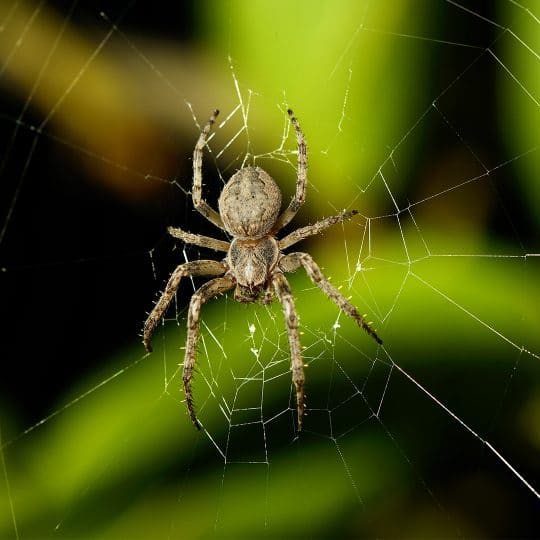 Depictions of spiders often include the spider’s web, an intricately crafted structure waiting to entrap unsuspecting bugs for the spider’s next meal. But despite this relatively common depiction, only about half of the spiders in Northern Virginia are web building spiders.

The other half are crawling spiders which track down their prey instead of catching it. Because the spiders have different habits and habitats to enable them to find the food they need, different pest control methods are also necessary. The most effective pest control for either type of spider requires an understanding of how spiders hunt and where spiders live.

How Treatments Differ Between Web Building and Crawling Spiders

Web building spiders catch their prey by building a web across an area where other bugs are likely to traverse. The bugs get caught in the sticky silk of the web, at which point the spider can eat the prey when ready.

Crawling spiders hunt their prey. They will follow prey until they can catch it, using their silk to wrap up a bug in order to subdue it. The different species of crawling spiders that live in Northern Virginia include:

Some crawling spiders, like the brown recluse, will still build webs as a safe home, but hunt for their prey rather than trapping it in a web.

With both of these spiders, prevention can help significantly. Ongoing pest control uses outdoor treatments around doors, windows, foundations, and other areas, all of which may have the small openings that spiders are able to get through to get inside.

When spiders are already inside, more specific methods are often required to remove them. For web building spiders, this process can be somewhat easier since the spiders leave webs behind, letting your pest control technician know where spiders are actrive so they can focus treatments in specific areas. They can also remove webs, which often indicate a threat to spiders and will encourage them to move on.

Crawling spiders could be spread over a much wider area and are already more likely to move about frequently. A top choice here is to target the food source instead, using pest control methods to exterminate the bugs spiders are eating. With their food source gone, many spiders will leave on their own.

Our team at ExtermPRO can identify spider species in Gainesville and plan the correct treatment to get rid of them. Contact our team for more information on spider treatments and pest control solutions.