Five Signs You Have a Rat Infestation 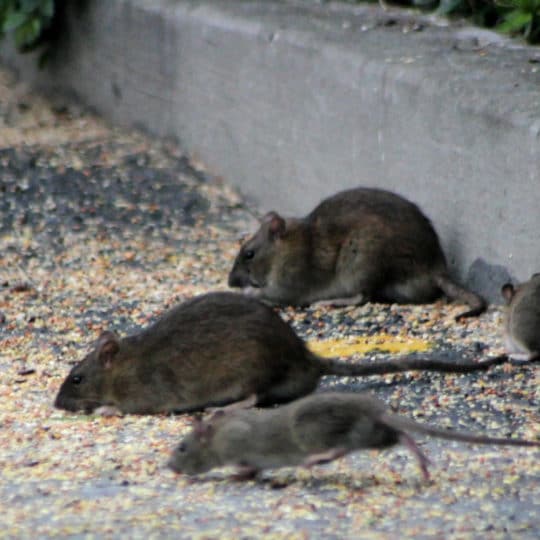 Few things are worse than a mouse infestation, except perhaps a rat infestation. This dirty, clever rodent isn’t one you want to mess around with. We get many phone calls from homeowners saying they have a rodent infestation, they just don’t know which one. Fortunately, there are some telltale signs you’re dealing with rats.

Signs of a Rat Infestation

Unlike mice, rat feces are large—between 1/2″ to 3/4″ long—and the ends are rounded rather than pointy.

Norway rats often make their nests in the lower levels of buildings, and you might find holes near your home foundation or see wall insulation peaking out where it shouldn’t. They also stay within 100′ of their nest, so if they’re in your home, they’ve likely decided to make it their home, too.

When rats travel in packs, they bring along a remarkably unpleasant odor.

Rats aren’t afraid of you. And you won’t confuse them with mice—they are about a foot long! They are also considered clever because they won’t fall for the traps you lay out.

Rodents, in general, aren’t clean animals, but rats are particularly dirty. They leave behind a greasy trail caused by oil and dirt in their coat.

Rat Infestation? Not Anymore with ExtermPRO.

Whether you see the signs of a rat problem or you’ve identified one, ExtermPRO knows just how to take care of it. We’re your neighborhood pest professionals serving Northern Virginia. Call us today at 571-620-1168 for a free quote.